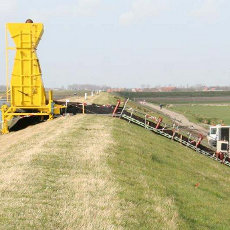 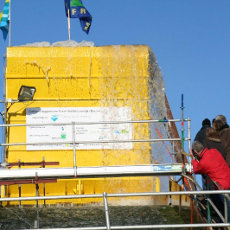 Three types of simulators have been designed: for wave overtopping, wave run-up and wave impacts. A summary paper (1182 kb) is available on processes to be simulated and the working and capacity of the simulators. A recent development was advice for an avalanche simulator at Iceland.

The wave overtopping simulator was developed by Van der Meer with the idea that:
The simulator has been developed within the ComCoast project and first tests have been performed in March 2007 by the consortium Royal Haskoning/Infram. First results have been described by Dutch journals De Ingenieur and Civiele Techniek and at international conferences. Also the SGR (Smart Grass Reinforcement), a prize winning idea by Royal Haskoning/Infram to stabilize inner slopes of dikes, has been tested.

Further tests have been performed for the Rijkswaterstaat, with Deltares leading the Consortium. Tests were performed from 2008-2014. A summary report of all test results from 2007 and 2008 is available for download. A summarizing paper, including the tests of 2009, can also be downloaded. Sand dikes with grass cover have been tested at the river IJssel and Vecht in 2020 and 2021, see the movies below.

The simulator was in 2007 nominated for the "Vernufteling", the yearly price for best invention by an engineering company in the Netherlands.

In 2008 a Wave Overtopping Simulator has been designed for Vietnam (Water Resources University, Hanoi, in cooperation with Delft University of Technology). This Simulator has tested Vietnamese dikes in 2009 and 2010. Moreover, a three times innovative and larger Simulator has recently been designed for the USA, see the the 2011 papers at Coastal Structures 2011. A dedicated wave overtopping simulator was designed and fabricated to test a mock-up dike with tropical grass in Singapore, 2019-2020. A paper can be found on the results. Also tests have been performed with a man standing in front of the simulator in order to look at allowable wave overtopping, see the movie below.
A further development is a grass sod strength puller, which can be used to test the actual strength of grass covers. The device has been automated in 2019. See the last movies below for an impression.

The following movies are available: