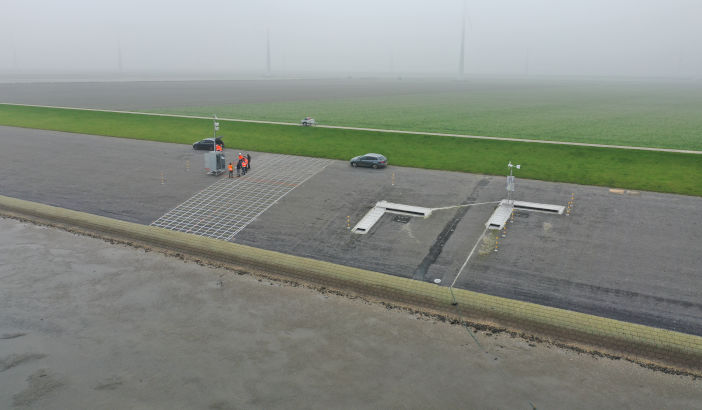 Two wave overtopping boxes in the dike, where the waves can enter the boxes over a length of 4 m. Left the installation with two lasers and the grid for video referencing.

With the Waterboard Noorderzijlvest a twelve years lasting research project has been launched in 2019 on field measurements in an estuary of the Wadden Sea and on field measurement at two dike locations. Two wave overtopping boxes have been installed at different levels to measure wave overtopping during extreme winter storms. Videos on the installed boxes and the first storm in 2019 are: The set-up of the measurements at the dike and the analysis of the first storm have been reported in the following paper.

A very innovative device has been developed to measure wave run-up on the dike during storms: two laser scanners. Videos of the calibration with perpendicular up-rushing waves and with oblique waves are available, using the wave run-up simulator to simulate the waves. Then the system with lasers was installed at the dike and measured its first storm with very oblique waves (almost along the dike) in February 2020. Results have been described in Oosterlo et al. (2019 and 2020).
© 2023 Van der Meer Consulting B.V. / SkarWeb