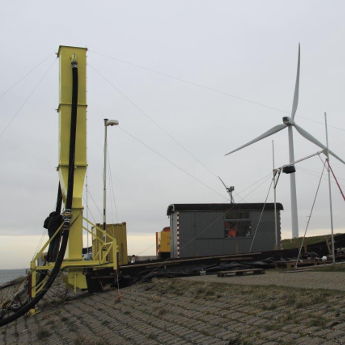 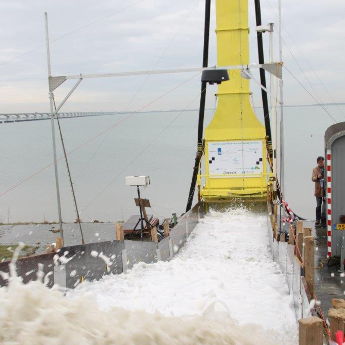 A most recent innovation from 2011 is the Wave Run-up Simulator. Waves break on the seaward site of a dike or levee and rush-up the slope. The upper part of the dike has often a grassed slope, like the landward slope which can be attacked by wave overtopping. The process of simulation of wave run-up has been described in Van der Meer (2009 - 7252 kB). A first video of a pilot test has been made:
Lessons learned of this pilot test were that the side walls should be strengthened and that the run-up simulator should be modified to a more slender shape. These improvements have been: a new slender run-up simulator has been fabricated end of 2013 and tests have been performed in 2014 at a dike slope in the province of Zeeland. An impression is given is given by the video:.
The wave run-up simulator was also used to generate impacts by up-rushing waves on the first step of a staircase, 0.46 m high, see the video:

SNN - The Northern Netherlands Provinces Alliance. Investing in your future
This project was part-funded by the European Regional Development Fund and the Dutch Ministry of Economic Affairs.

The wave run-up simulator was also used to simulate very small (0.5 m) waves on a sand dike at the river Vecht.